George Beck and his wife Elizabeth (Betsy) Claver and their children John Jacob Beck, George Beck, Jr., Susannah Beck, Andrew Milton Beck, David Beck, Jacob Beck, and William B. Beck traveled from Rowan, North Carolina in 1807 seeking to explore the "West" and redeem a government offer of land to all military veterans who had served in the Revolutionary War. George Beck, Sr. was a Private in the Revolutionary War, and served on the Yadkin River in North Carolina.

George Beck Sr. and family arrived in southern Indiana in the fall of 1807. His wife and daughters remained with friends in Louisville, Kentucky while George Sr. and his sons, George Jr. and John explored the southern Indiana territory. 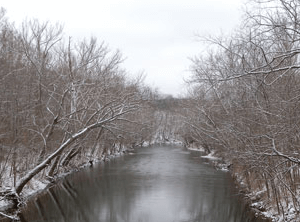 George Sr. and his sons made their way to a local River and followed it to approximately 4 miles from where Beck's Mill now stands. It was a cold winter and a snow storm forced the men to camp beside a large fallen tree. As the winter was cold and the waters of the river ran deep and slow George Beck called the river "Blue River". A name that has been used for the river ever since.

On a coon hunting trip during the expedition sons George and John discovered a large spring that they believed to be the head of the Blue River. At first site of the large spring George Beck Sr. decided it would be a good place for a mill. They began at once to cut logs and built a 15ft x 15ft building. They quarried a set of "buhr stones" out of what they called "iron stone", about a quarter mile from the mill and made a dam inside the opening of the spring. The water was conducted through hollow logs to a paddle wheel which ran the buhrs and ground the corn. The first corn was ground on August 28th 1808. Settlers from nearby Pigeon Roost were the first to come to the mill.

The mill proved to be quite successful and many settlers visited the mill the following year. A fort was built approximately 165ft away (across the road) and a cornerstone of the fort is still there. Later in the year of 1808 a saw mill was added to the gristmill.

Over time new pieces of equipment were installed in the mill such as carding machines and a wool picker. The carding machine was added and began working on May 20th 1822. A wool picker is a device that cleans the newly shorn wool. This new equipment was also water powered. The picker was a necessary item because wool needed to be cleaned before being fed to the carding machines. This made the chore of texturing wool for the pioneer wife much easier to make into cloth. Little “Squirrel tails” were made by one of the carding machine to be used with the spinning wheels to make bobbins of wool.

With the addition of new equipment the mill proved to be too small and a larger log mill was built in 1825-1826. This new and enlarged Mill was reconstructed into a building of approximately 20 feet by 30 feet.

In the year 1864 the present frame building was built that we now know as Beck's Mill and the carding machine and the wool picker added to the second floor. The pictures available today depict this structure. The Mill continued to operate until approximately 1950. Contracts to provide corn meal were agreed to my various organizations. The Monon Railroad always had a contract with the mill to provide corn meal at Christmas time to all of its rail agents along the railroad.

Beck's Mill is one of the most famous and historic landmarks in Indiana. Beck's Mill was added to the National Register of Historic Places in 2007. Beck's Mill is the only extant mill in Indiana that used only grindstone milling in the entire milling process.